Greater Victoria (also known as the Greater Victoria Region) is located on the southern tip of Vancouver Island. It is a cultural rather than political entity, usually defined as the thirteen easternmost municipalities of the Capital Regional District (CRD) on Vancouver Island as well as some adjacent areas and nearby islands. The Capital Regional District administers some aspects of public administration for the whole metro region; other aspects are administered by the individual member municipalities of Greater Victoria. Roughly, Greater Victoria consists of all land and nearby islands east of an imaginary line drawn from the southern end of Finlayson Arm to the eastern shore of Sooke Harbour, along with some lands on the northern shore of Sooke Harbour. The Greater Victoria region has a combined population of 359,991 according to the 2011 Canadian census.

Many places, buildings, and institutions associated with Victoria (the University of Victoria, Victoria International Airport, or the Swartz Bay Ferry Terminal, for example), actually exist outside the City of Victoria. Victoria is the locality indicated in the mailing addresses of several CRD municipalities and localities adjacent to Victoria. The central city of Victoria lends its name and cultural influence to many places and organizations in the metro region.

This breakdown is roughly mirrored by the three school districts in Greater Victoria. 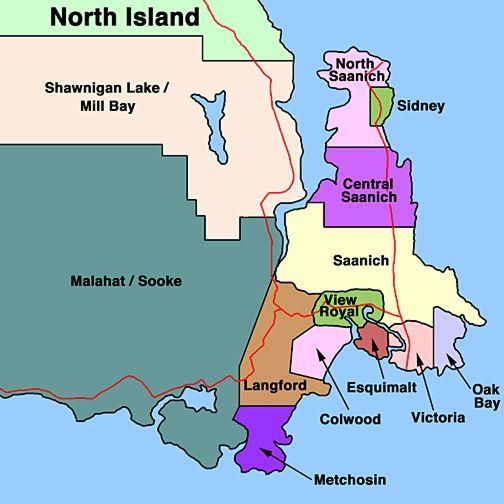